I figure it's about time to update my 'About Me' post for any new people viewing this blog. So here you have it - everything you did (and didn't) want to know about me (and my cats). Enjoy! Hello there! My name is Britney, and I'm addicted to caffeine and knitting. Roller derby is my sport of choice, though I've been rather conflicted about it lately. I'm a thrift store junkie, and love to show off the strange little knick-knacks I discover. I have four cats, plus my roomie's makes five, and I adore them all. My best friend moved in with me in December 2011, and we are both loving what our household is becoming. I enjoy hugs, and love to cuddle with my kitties. I am also painfully shy and awkward so please excuse me whenever I say something weird.

My hobbies include knitting, photography, painting, watching box sets, playing roller derby, and thrifting. I love hearing from people, so never hesitate to comment or message me. I also love challenges, so always feel free to message me about any custom orders you'd like me to take on.
Meet Logan Also called Logi, Logi-bear, and Chub-Chub. He is very much a drag queen, and I love him for it. He enjoys lounging, collecting straws, and being fat. He originally belonged to Sydney, my dearest friend. When she took an internship in California a while back that wouldn't allow her pets, everyone told her it was probably time to get rid of them. She informed me that I was the only person she knew that immediately declaired that I would keep them for her and love them as my own. At the time, I wasn't really a cat person, but she was my best friend so I had to offer. A few months later, I was in love with them. When she came home and moved in with her parents, she came to visit them (and me) daily. She moved away to Orlando in January to work for Disney and, after moving in with roommates that already had tons of pets, asked if I wanted to keep them. I was hesitant at first because these were her babies, but she explained that the move and the large dogs wouldn't be good for them. Of course, she was right so I readily agreed to adopt her sweeties. When she moved back home again, we made plans to live together, and now we're all one big happy family.
Meet Ninja Also known as Ninj and Ninjer (as the Brits would say). She has split personalities. Sometimes she thinks she's a cat, but mostly she's a tiny panther. This little beauty definitely lives up to her name. She can mostly be found in the shadows or sneaking up on unsuspecting objects, kitties, and people, but every once in a while she'll decide she wants some loving and come cuddle.
Meet Buffy 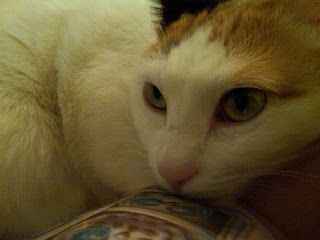 She's just a bitch.... except to Logan, Sydney, and me. She's another one of Sydney's sweeties that I adopted. She mainly likes to cuddle under the covers and swat at the other kitties if they bother her.
Meet Special K 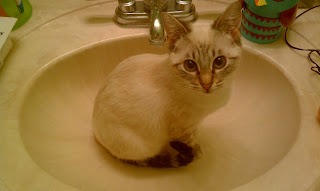 Also called Kitten. She really is a special kitty. She enjoys being adorable and snoozing in my lap while I knit. She was found one day while Sydney and I were driving home from Taco Bueno. Sydney spotted her and we made a quick (very illegal) u-turn to go back so I could pick her up and take her home. She was orginally named after this web-comic, but has not failed one day to live up to her name.
Collapse